The ESCR 2011 Annual Scientific Meeting has justed closed its doors in Amsterdam, the Netherlands. More than 500 participants showed once again the high interest in cardiac radiology within Europe.
Various different experts not only from Europe, but Asia as well as the United States gathered from October 27-29, 2011, in the Felix Meritis, a historical building in the heart of Amsterdam, dedicated to Arts, Culture and Science. Besides the outstanding educational and scientific lectures, a third track offering continuous case discussions was offered.
The meeting was round of by the Floating Dinner where participants had the chance to get a closer look at the city of Amsterdam while easily floating through the famous krachts.
Of course ESCR would like to thank our industry partners for their valuable support to the society and congress.

The 2011 General Assembly confirmed all names for the new ESCR 2011-2014 Board, which will, after a certain transition period, take over all duties of the society.

Congress related documents like confirmation of attendance, invoice and CME accreditation are available in your MyUserArea, which may be accessed by using your last name in combination with your Personal ID. 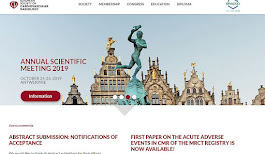